This week we welcomed a trio of aspiring web developers to our year long apprenticeship programme. They will undertake technical training as part of a national peer group, alongside on-the-job learning and support from our team. They are joined by Matthew Proudman who started on the same day as a Junior Developer.

This year’s group have a wide range of backgrounds and experience, and will work both as a team and individually on projects to establish core development skills in line with a national peer group and training from Happy, before starting to work on client projects under the close supervision of their Upbeat team mentors.

Andrea Cuneo joins the scheme following a degree in Clinical Psychology and working abroad, said, “I’ve always been very interested in technology and its applications. After some research about coding and programming I decided to try a career in web development and thanks to the Upbeat apprenticeship, I’m having a great opportunity to learn and have a future in this industry.”

Andrea is joined by Jake Milburn who has started the scheme following studying Maths and Physics, and Rebecca Kirby, who joins from a computing course at Carlisle College having been inspired to learn to program online.

The apprentices join Alan Saunders who progressed through our previous scheme and was offered a full time job as Junior Web Developer after completing his apprenticeship. He also won ‘apprentice of the year 2016’ awarded by Happy.

Alan says “The great thing about the apprenticeship is that it’s not just learning about the theory in the classroom, you actually get to implement what you learn on day-to-day projects. Working alongside others also helps develop those other important life skills such as communication and time management, as well as learning more about Drupal.“ 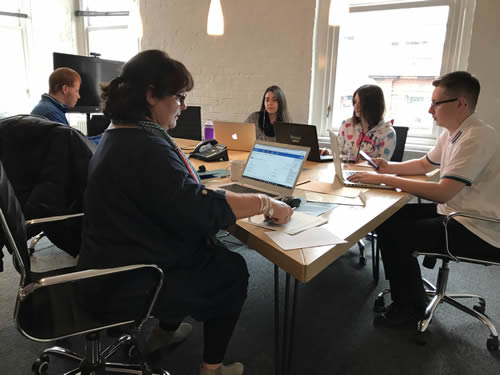